King Jigme Khesar and Queen Jetsun Pema alongside Crown Prince Jigme Namgyel Wangchuck visited India for four days from 30 October 2017. The Royal Couple was received by Indian foreign minister Sushma Swaraj. The visit of Their Majesties is in keeping with the long standing tradition of regular high-level exchanges between the two countries. An Indian foreign ministry statement highlighted that the visit would provide an opportunity for both sides to review the entire gamut of bilateral cooperation, including plans for befitting celebrations of golden jubilee of establishment of diplomatic relations between Bhutan and India in the year 2018, and to advance the special bilateral ties of friendship and cooperation. The Prime Minister hosted a dinner for the Royal Family, where he presented a football and a chess set to Prince Jigme Namgyel Wangchuck. Both sides expressed satisfaction at the excellent state of bilateral relations and reaffirmed their commitment to advance these exemplary relations across diverse sectors of cooperation. King Jigme Khesar conveyed appreciation for invaluable support that the India provides for Bhutan’s socio-economic development.

King Jigme Khesar and Queen Jetsun Pema visited Thailand on 16 October 2016 to pay respects to the late King Bhumibol Adulyadej who passed away on 13 October. Their Majesties attended the Royal Cremation during their three-day stay. Their Majesties paid their respects to His Majesty King Bhumibol Adulyadej in front of his body in the Grand Palace's Phra Thinang Dusit Maha Prasat Throne Hall, stressing the strengthened ties between their country and Thailand. King Jigme Khesar also ordered for the Bhutanese flag to fly at half mast for 3 days and for a prayer ceremony be hosted in Thimphu, Bhutan to honour the late King of Thailand. On the sixth day of National Mourning in Singapore, 28th March 2015, His Majesty the King of Bhutan Jigme Khesar Namgyel Wangchuck and Her Majesty the Gyaltsuen Jetsun Pema  arrived in Singapore and visited the Parliament House at 12.35 PM to pay their last respects to the late Mr Lee Kuan Yew, where his body was laying in state.

His Majesty wrote the following in the condolence book:

On the passing of His Excellency Lee Kuan Yew, one of the most extraordinary and visionary leaders of our time, I convey my deepest condolences and those of the people of Bhutan." - Jigme KN Wangchuck 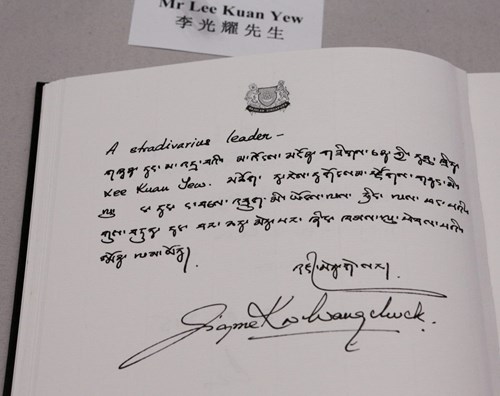 His Majesty The King also commanded for the Bhutanese National Flag to be flown at Half Mast in respect of His Excellency Mr Lee Kuan Yew, Singapore's first Prime Minister. 26 January 2013: His Majesty the King was the Chief Guest at the 64th Republic Day of India celebrations in Delhi. His Majesty also graced the At Home Reception for dignitaries, national award winners and government officials at the Rashtrapati Bhavan. His Majesty the King granted an audience to the Indian Chief of Army Staff, General Bikram Singh.

The Royal Couple visited London in November 2011 after visiting Japan. Away from the usual traditional Kira that is often seen on Queen Jetsun Pema, Her Majesty was seen wearing a chic monochrome pencil skirt and black and grey blazer – accessorised with patent pumps and a Chanel bag. Below is the outline of the programme:

(1) The King of Bhutan, His Majesty Jigme Khesar Namgyel Wangchuck and Her Majesty Queen Jetsun Pema Wangchuck stayed in Japan as State Guests from November 15, visiting Tokyo, Fukushima and Kyoto, before departing on November 20.

(2) Their Majesties arrived at Narita Airport on the morning of the 15th and received a courtesy call from Prime Minister Noda and his wife that evening at the State Guest House. They exchanged views on various topics including the bilateral relationship and economic cooperation.

(4) On the morning of the 17th, His Majesty was awarded an Honorary Degree of Doctor of Economics at Keio University and offered an acceptance speech. At noon, His Majesty visited the National Diet and delivered an address in the Chamber of the House of Representatives. In the afternoon, Their Majesties visited Meiji Jingu Shrine, followed by an exhibition of judo at the Kodokan Judo Institute. In the evening, Their Majesties attended a welcome reception co-hosted by the Japan-Kingdom of Bhutan Parliamentarians' Friendship League, the Japan Bhutan Friendship Association and the Honorary Consul-General of Bhutan in Japan.

(5) On the 18th, Their Majesties received a Farewell Call from His Imperial Highness the Crown Prince at the State Guest House, followed by a Farewell Visit by Her Majesty the Empress. Their Majesties then paid a visit to Soma City, in Fukushima Prefecture, where they interacted with elementary school students and offered a prayer for the victims of the Great East Japan Earthquake at a devastated by the disaster.

(6) On the 19th, in Kyoto, Their Majesties visited Kinkaku-ji Temple, Sanjusangen-do, the Kyoto Traditional Crafts Center, and also enjoyed ikebana and tea ceremony workshops. In the evening, Their Majesties attended a welcome dinner jointly hosted by Kyoto Prefecture, Kyoto City, and the Kyoto Chamber of Commerce and Industry.

(7) On the 20th, after a morning visit to Sento Imperial Palace, Their Majesties departed Japan from Kansai International Airport.