On the eve of the Royal Wedding, bride Jetsun Pema offered prayers at Druk Namgyal Lhakhang near Dochula Pass before making her way to a traditional Chipdrel (a ceremonial procession of welcome for an honoured guest, to ensure the most auspicious beginning to an important event) in Wangduephodrang where she spent the night. On the auspicious day of October 13 2011, Jetsun Pema was crowned the Queen of Bhutan at age 21 upon marrying King Jigme Khesar Namgyel Wangchuck who was 31 years old then.

The royal wedding was held in the majestic fortress, Punakha Dzong, Palace of Great Happiness, with traditional Bhutanese ceremonies. Punakha district used to be Bhutan’s ancient capital before the capital was changed to Thimphu in 1955. The Punakha Dzong is a historic site in Bhutan and also one of the country’s most beautiful fortresses.

The wedding day began as early as 4.00am with prayers by the Chief Abbot, followed by the traditional Buddhist ceremony that commenced around 8.20am, the time set by royal astrologers. The King wore the royal yellow sash, walked into the courtyard of Punakha Dzong and proceeded up the high staircase while waiting for the arrival of the bride. The bride then arrived at the end of a procession of red-robed monks and flag bearers across the wooden footbridge over the Punakha river.

The royal nuptial ceremony combined coronation and nuptials. Ahead of the ceremony, the King, Fourth King Jigme Singye Wangchuck and the Chief Abbot (Je Khenpo) sought the blessings of Zhabdrung Namgyel, the lama who unified Bhutan in the 17th century. The King received the Dar Na Nga, five silk scarves in auspicious colours, representing empowerment from Zhabdrung himself. The royal bride prayed and prostrated herself in an outer chamber before the King’s father emerged to place the Dar Na Nga, five silk scarves on her neck, blessed by Shabdrung, and presented her with a golden chalice containing curd that has been transformed into holy ambrosia. The ceremony then shifted to Grand Kuenra (congregration hall) for the sacred nuptial ceremony. The bride prostrated before the King and presented him with a cup of ambrosia signifying her devotion to the continuity of the Wangchuck dynasty. The King also made a symbolic offering of the ambrosia to the Triple Gem and the Guardian Deities. The King then solemnly placed an embroidered Phoenix Crown of the Druk Gyaltsuen (Dragon Queen) on the head of the bride, followed by a formal proclamation of Ashi Jetsun Pema Wangchuck as the Queen of Bhutan. The King then sat back down on the Golden Throne and placed his Raven Crown on his own head with his new wife sitting to his left. King Jigme Khesar Namgyel smiling at his wife at the wedding ceremony.

The proclamation was followed by the Tashi Ngasoel ceremony at the Grand Kuenra in Punakha Dzong. During the ceremony, the Chief Abbot chanted Ngoedrup Langwa prayers for the accumulation of spiritual and worldly virtues. The ceremony kicks off three days of celebration in the Kingdom. In the afternoon, thousands of people gathered by Punakha Dzong to soak in the public celebration. The Royal Couple was seen mingling with the wedding guests and ordinary Bhutanese. The wedding celebration featured traditional dances and songs, archery, a public luncheon, and tashi lekdar (congratulatory salutations) from public officials and ordinary people. The Royal Couple mingling with the crowd and greeting the locals after the wedding ceremony.

There is also a public celebration held at the Changlimithang Stadium in Thimphu on 15 October 2011, three days after the wedding. Tens of thousands of people packed the stadium to celebrate the royal wedding and many arrived as early as 2am to ensure that they did not miss the opportunity. A large thongdrel (religious image usually only unveiled during tsechu, the main religious festival in Bhutan) was unveiled at the celebration. A large thongdrel was unveiled at the Changlimithang Stadium

The King also made an impromptu speech to thank the people, the Fourth King, the Royal Grandmother, and Their Majesties the Queen Mothers for their support and pledged to serve the nation tirelessly with Queen Jetsun Pema. The King also surprised the nation by planting a kiss on the cheek and the lips of the Queen in public for the first time prior to the speech, receiving thunderous cheers and applause from the crowd. The celebration was majestic with many cultural performances featuring 500 performers and the highlight of the celebration was the Wangzhey performed by the King, alongside the Prime Minister, the opposition leader, cabinet ministers and members of parliament. 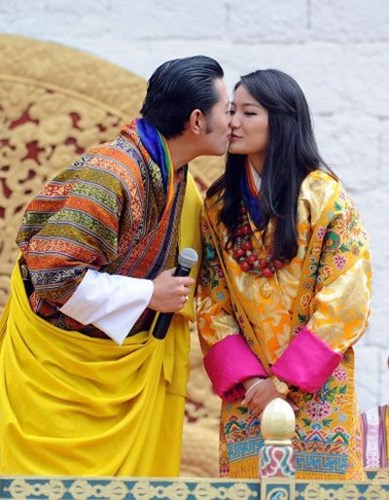 The royal wedding and celebrations is an unprecedented event in Bhutan. In fact, it was the largest media event in the history of Bhutan with approximately 160 foreign journalists and media groups covering the wedding in the country. Eleven mini buses were arranged for the foreign media to ferry them from Thimphu to Punakha where the wedding ceremony took place. 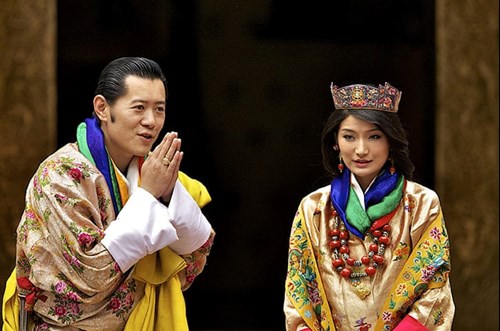 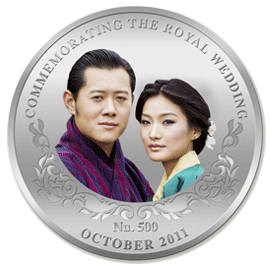 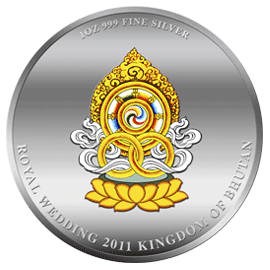 The commemorative banknote and coin can be purchased at Bhutan Natural. 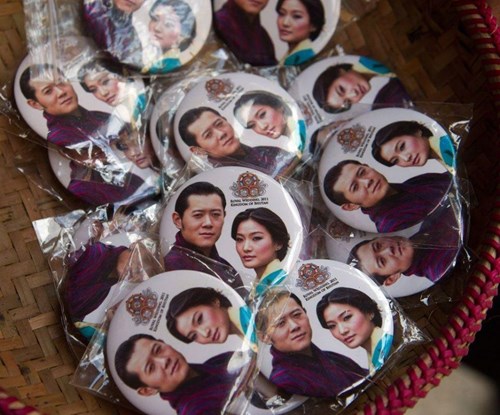 The newlyweds visited India for their 9-day honeymoon soon after the royal wedding. They travelled through Rajasthan aboard a special train chartered by the Indian government. Their first stop was to the City Palace, Jaipur and were greeted by Princess Diya Kumari and her husband, Narendra Singh, alongside their son, Padmanabh who is next in line as the next Maharaja of Jaipur. Princess Diya, who personally showed the Bhutan’s King and Queen around the City Palace said she found them very down to earth and friendly. In New Delhi, red carpet was rolled out for the Royal Couple and they were given the ceremonial guard of honour at Rashtrapati Bhavan. They were received by Prime Minister Manmohan Singh and other senior ministers. The other Indian cities that the couple visited include Jodhpur and Udaipur. 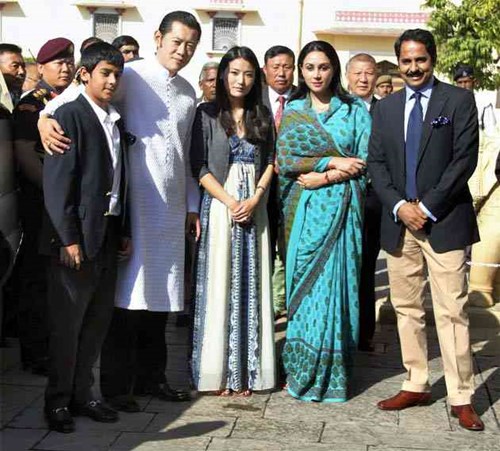 The Royal Couple enjoying their honeymoon in Rajasthan 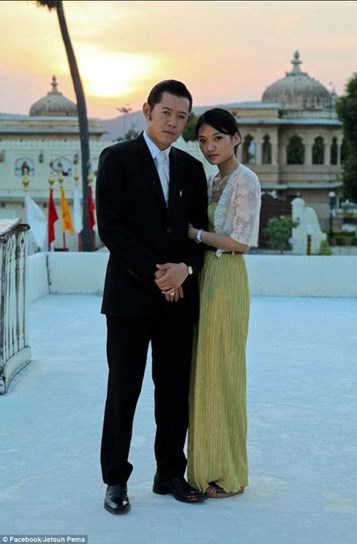 The Prime Minister hosted a lunch for His Majesty the King and Her Majesty the Queen in New Delhi.

Subsequently, the Royal Couple visited Japan for a 6-day State Visit. Their Majesties were enthusiastically received by the Japanese people. They stayed in Japan as State Guests from November 15, visiting Tokyo, Fukushima and Kyoto. Thereafter, the couple also visited England as part of the ongoing tour.

Click here for more details and information on the other official state visits by the Royal Family.